This is like the city name. It is not very specific about the location of the electron.
This number describes the energy level/orbit/shell in which the electron is located. (energy level is the same thing as orbit or shell) 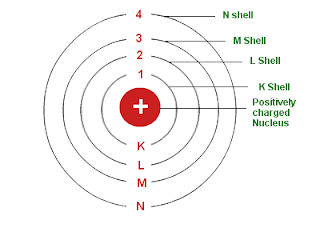 Neil Bohr said that the atom has various energy levels around the nucleus. The principal quantum number tells us in which energy level the electron is located.

There can be many energy levels around the nucleus but normally we only deal with the first 4 or 5.

This quantum number is like the name of the street in our address. It is more specific as compared to the principal quantum number.

This Quantum number describes the subshells which are present within a shell. Moreover, it also describes the shape of the orbitals about which we will talk about later.

We also observer that if we move up by one shell we add subshell just like in the above examples.

NOTE: EACH ORBITAL CAN ACCOMMODATE A MAXIMUM OF 2 ELECTRONS.

Since orbitals are within subshells, there is a mathematical representation between the subshells and orbitals. This is given by:
m= -l→ +l (m equals all values from -ive l to +ive l)
This includes 0.
Example: For p subshell
since we are given p subshell, l=1
∴ m= -1 → +l
∴ m= -1, 0, 1

∴ there are 3 orbitals within subshell p.

There is only one orbital within s-subshell.
(0 doesn't mean that there are zero orbitals. 0 is considered as 1 orbital!)

If you observe carefully you will notice a relation between the shell and the number of orbitals present in it. This is:

where n is the shell number. This is just a continuation of the previous relation if you think about how that 2 appeared there.

In subjective tests, for this quantum number its better to mention both 1/2 and +1/2 because we cannot calculate the direction of spin. In objective tests if you get the other 3 quantum numbers it really doesn't matter weather the option says 1/2 or +1/2.

Now we draw to the end of this chapter. But we are missing one thing. How do we compile the address of the electron and write it in an easily understandable way? Here's how:

Example: If the electron is present in n=3 and l=2.

We can calculate the number of orbitals present in l subshell by using the relation m= -l→ +l. In this case we get 5 possibilities of m, i,e, -2, -1, 0, +1, +2.
Since the electron can be in any of these orbitals we don't represent them.
We also know that the maximum electrons present in the d-subshell is 6. So a completely filled 3d is represented by 3d6.

Email ThisBlogThis!Share to TwitterShare to FacebookShare to Pinterest
Labels: Chemistry